Relativistic effects play a significant role in GPS positioning since clocks onboard satellites travel at high speeds in space (roughly 4 km/sec) and are located at a lower gravitational potential than the Earth’s surface. In this blog post, I explain how one formulation for the relativistic clock correction proposed in the GPS Interface Control Document (ICD) is not well suited for high-precision applications.

There are two ways of computing the relativistic effect caused by the orbit eccentricity. The first one, described in the GPS ICD (ICD-GPS-200C, section 20.3.3.3.3.1) can be expressed as (in units of meters):

where ‘GM’ is the gravitational constant of the Earth, ‘a’ is the orbit’s semi-major axis, ‘e’ is the eccentricity of the orbit, ‘E’ is the eccentric anomaly and ‘c’ is the speed of light. Looking at this equation, we understand that the relativistic correction occurs as a consequence of the orbit eccentricity and will have a periodic component (due to the sine term).

The ICD also states that the control segment uses the following alternative but equivalent expression for the relativistic effect:

where ‘x’ and ‘v’ are the position and velocity vectors of the satellite, respectively. This formulation is also better suited to using IGS products since the SP3 orbit format provides tabulated satellite positions, and satellite velocity can be derived simply from the polynomial expressions used to interpolate positions.

Based on a Keplerian orbit, the above two equations can indeed be shown to be equivalent, as explained by Ashby (2003). However, GNSS satellites do not follow true Keplerian orbits and are subject to various perturbations. Hence, when using the perturbed satellite position and velocity in the last equation, the two formulations are not equivalent anymore. The differences are plotted in Fig 1 for all GPS satellites (shown with different colours) on a randomly selected day (28 Nov 2017). 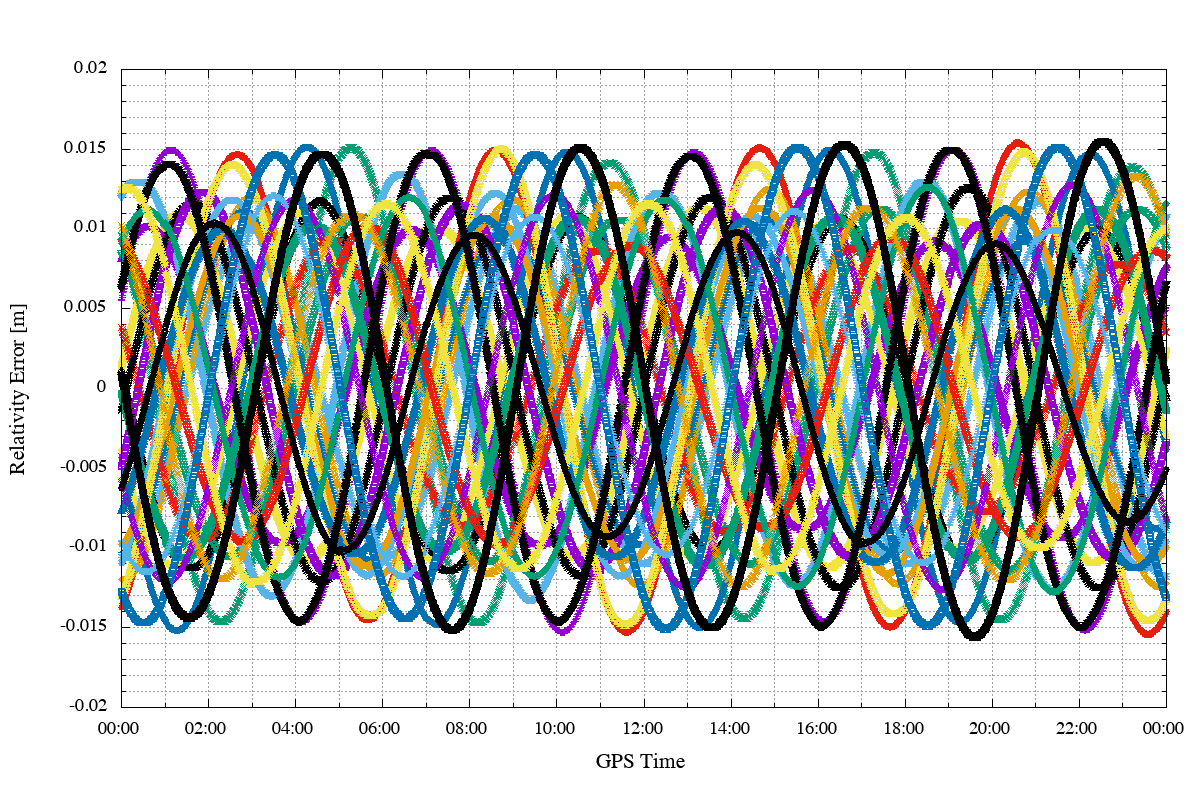 While these differences have very limited impact on single point positioning, we should be careful when using the RTCM SSR corrections for PPP or PPP-RTK. Since the latter are corrections to the broadcast ephemeris, computing satellite clock corrections containing the relativistic term following the first formulation of the GPS ICD would lead to significant modelling errors which would negatively impact position estimates.